The task: Could be anything, but in this case, it’s designed to give students exposure using Moodle and Google Drive.

Rules of the challenge: First team to have all members reply to a forum post with a click-able link to a shared Google Doc (in this case containing a brief on their relationship with technology) wins.

Limitations: (Limitations increase creativity and innovation – see Phil Hansen’s TED Talk, Embrace the Shake). Each team gets only two questions of the instructor (this forces use of internal team resources, and clear team communication about when to use the valuable resource of a question to the instructor).

Teacher skill development: Practicing letting students trip and stumble until they find their stride as a team. I fear our parenting (mine included) and our education paradigm are depriving people from learning how to solve problems on their own and in groups, and that we have to wean ourselves of constantly stepping in and helping them along. (See Blessings of a Skinned Knee and tons of other resources on this point).

I’m sure this has been written about in a thousand other places, but I have some recent evidence to support Assertion #1; that physical orientation is a factor in team success. Facilitating a handful of sections of 9th graders attempting this team challenge, in every case the winning team was the one that oriented itself in physical space for better communication, and in every case it was a blowout win. Here are examples of two of the classes, and how they arranged their seating for the group challenge.

Following image: In a classroom with a big square-cornered horseshoe, the team that huddled at one corner demolished the other team, which was spread far apart. 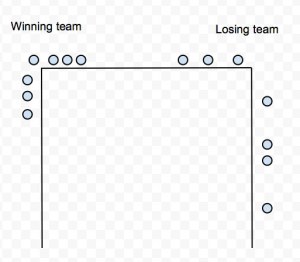 Following image: In a room with individual desks originally arranged in typical grid format, facing front—it was the team that arranged a circle that demolished the other, which had brought their desks closer together, but remained facing forward.

The obvious hypothesis is that this arrangement allows for better communication—likely through the simple fact, in my thinking, that the team members can see each other, and thus pick up on the preponderance of communication signals that are non-verbal. (Of course, dear scientists out there, it is also possible that the physical orientation of successful teams is a result of the already superior team-working skills of the winning teams, but I think the random sampling of the team formation addresses this issue).

There are many other critical skills students can internalize through such activities, and I think that we are remiss as teachers if we are thinking explicitly only of the content we are covering. Yes, I need all these students to be able to use the cloud resources we covered in this exercise, but that “content” is not nearly as important in my mind as what they learned about teamwork and communication. Further, I would argue, and I think the research strongly supports, that this “content” is learned better when it is done in conjunction with social interaction and the employment of various other “critical skills” (see 21st Century Skills, Blooms Taxonomy, etc., and Assertion #2 above).

Schools that are able to survive and thrive in the coming years, and more importantly that will best serve their students, are ones who institutionally and culturally embrace the idea of explicitly designing instruction for critical skill development, and who help their teachers develop the skills teachers need to construct these 21st century learning environments in ways that model the environments the teachers are designing for. Saying that another way: teachers will need to learn these new skills — in how to design learning to explicitly incorporate critical skills practice and development — in environments that model the environments they will be designing (real problems, and community-integrated, IMHO).

We had our first class where both teams oriented themselves into team-friendly shapes, and myself and the other teacher in class commented to each other that this was going to be the first close match. Our prediction held, and the team that won did so just barely (whereas all other classes saw blowouts, with the well-oriented team soundly defeating the other). Interestingly, we were still able to predict within two minutes of the 30 minute challenge which of the two well-oriented teams would win, and this was done based on the amount of eye contact, chatter, and getting up to walk over to another team member the team exhibited.

What's your Give? I think that is a critical question in everything we do. What value are we creating? The core of my work is educating for a sustainable future. Value-oriented learning. Community-integrated learning. Social entrepreneurship. Emergent, inquiry-driven, entrepreneurial learning. I've spent the last 20 years designing and facilitating face-to-face and online learning experiences and co-creative processes that help individuals and organizations develop the skills and attributes to transform themselves and the world. I have extensive experience in instructional and learning experience design, innovation, and technology spaces. View more posts

This site uses Akismet to reduce spam. Learn how your comment data is processed.